We need to know that they are relatively comfortable to survive

Optimum Temperatures for Redclaw (Cherax quadricarinatus) is between 23C & 31C (other species have different temperature ranges)
In the Northern Terriory of Australia where these Crayfish grow the temp can hover in the early 40's C for weeks in November each year. In the Dry Season the Temps can get low (around 10C) So these crays have the ability to survive 30C swing extremes during the year if the other conditions are right. One of the other conditions is water Acidity (ph)

From the studies we have read, the ideal ph is between 7 & 8.5 (slightly alkaline)
Our bore water appears to be naturally alkaline & has a calcium content which so far seems fine for the crays.

Probably the biggest issue is keeping the water clean & nitrate levels down.
Like all fish & other water dwellers, what they breathe in is also where they excrete their waste, and this waste builds up & changes the acidity of the water.
We have no nitrate measuring tools (only PH & Temp), so what we do at this stage is reduce the water level every 2 weeks (at the same time sucking up debris on the floor substrate) and then top up the container with fresh water.
This is the basis of aquaponics systems where the aquaponics guys circulate this water constantly through their gardens where the plants take up the excess nitrates & produce food from the waste. The remaining water is filtered & returns to the main redclaw/fish pond almost as good as new.

So at this point the pH reader may of outlived its $13 /8 useages lifetime with a reading of 10.8 . I retested the other bins & sure enough all were getting similar readings. So how accurate are the other readings on the days before??

The Aquarium is hitting 32C of an evening (The days have been 38C) and only drops 1.5C by morning. Have moved UPS further away from Glass as it gets hot (it will be great in the cooler Dry season)
Put a block of ice in 2 days ago and it dropped the temp to 28C, but only lasted a day before warming up. I put its "instability" down to being a smaller volume of water & trying to reach ambient wet season air temperature.

We have not tested our water for months (8months). Just wing it & remove/topup your water every two weeks or so.

Egg Stages of Redclaw Cherax quadricarinatus (in a tropical climate)
The older the babies, the more opate (or colourless) they will go. By the time they are flicked off of Mum, they are a very clear grey to clear bluish tinge. (hard to see)
The babies below were flicked off as we attempted capture & photograph. Hopefully they are old enough to survive. Some looked very dormant. 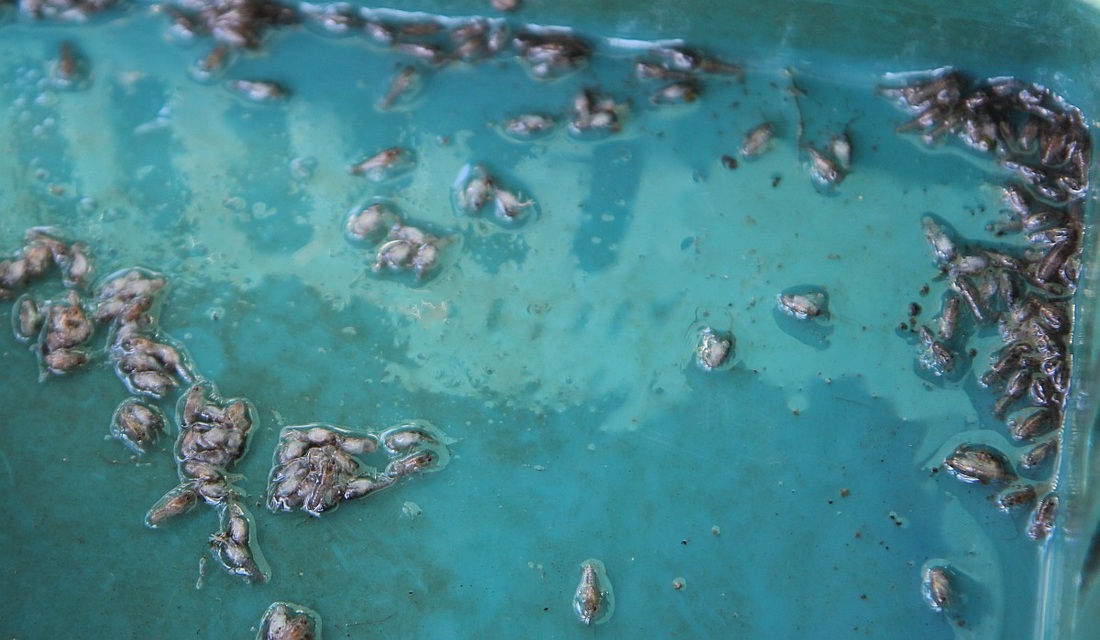 It took 12 months but we have finally seen a full breeding cycle in December 2013.
My guess is that eggs that survived from January 2013 went on to grow into redclaw. We had segregated all the larger redclaw (that we bred) to be in an IBC of their own ready for fishing bait. When cleaning out the tank we noticed a girl with crawling spawn dropping off of her & upon checking the mesh filter we had 80ish crawlers. So hopefully the other 50-60 redclaw in the 9-11 month old bracket) will start to breed soon & production will take a new twist.
Redclaw crayfish cuz inc australia