How and Why it began with us

We enjoy going fishing & putting our cherabin pots in each time as part of the ritual.
During the cooler times of the year (below 30C daytime), the barra prefer bait dropped in front of them instead of chasing after a lure, so there is always that waiting period between getting enough bait (cherabin prawn) and then hitting the water (sometimes that is only the overnight wait, and sometimes it is then a very quick fish that next morning as the bait diminishes) . We have already caught nice large redclaw where we usually go fishing as well as the preferred cherabin (prawn), so we thought “Why not try & grow our own”  Other people we know seem to be having fun growing & eating their own redclaw. Or are there things we are not being told about nurturing these redclaw crayfish.

It is already proving to be an intensive job using containers & water / air pumps,  whereas putting in the pots when out fishing may indeed be a quicker/better easier cheaper way to get barramundi  bait.

So let’s put the feelers out and obtain some breeding stock and give this Aquaculture thing a go. We can only fail & who knows we may get a feed out of it as well.

In preparation I obtained an IBC (Intermediate Bulk Container or tote) & a blue plastic 200 litre drum.
The IBC had been used for sump oil storage from a farm so needed several cleans over the coming week. (We have since moved on to other IBC’s obtained from farms that had nutrients in them)

Then one Saturday we got a call to say there was an unknown amount of Redclaw on the way.
Panic stations.
Water filling & cleaning & refilling of the IBC & our aquarium, kicking old pumps into gear.

I know we talked about it alot, but when reality arrives it is a whole new ballgame.

The following pages are written as it happened (like a blow by blow blog), so the end result or better technique (at this stage) may not be what was originally put down in the blog. Hopefully improvements are made along the way to make it easier for you to pick up and run with it.
(Months into it now & if you like heartache & disaster after disaster, then redclaw in IBC shutes is for you) 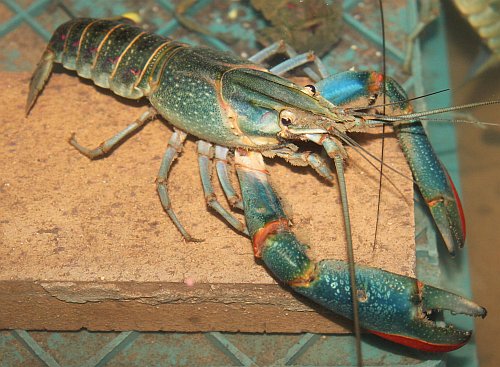 This was "Dave", one of our original male breeders
Redclaw crayfish cuz inc australia